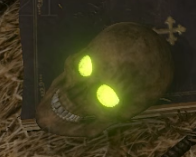 Fred speaks in English, with a rather amusing, horrifically bad French accent. His official title is "Monsieur Fred", however it is unknown of Fred origins if he is truly French, or mocking the French.

Fred is a man of many words, quite the joker in fact too, such many funny jokes as "What did the skeleton bring to the pot luck? ... Spare ribs". As lonely artillery players would agree, this cursed skull is quite the joker.

However strange it is that this cursed skeleton is to be replacing all sources of cannonballs, it is rather strange that Fred does not enjoy being loading into the barrel of a holy line wiping device, know as a cannon. During loading, The One and Ever So Holy Fred, shall refer to it's loader as "an ungrateful mongrel", such as his words specially proceed as "You ungrateful mongrel!". Fred may also question the loader "Why are you doing zis to me?" when loading him down the end of the holy line wiping device. Fred does seem to exhibit the traits of an adrenaline junkie, such as when the gunpowder is ignited behind the Holy Fred, he shall experience joy as he is hurling towards either, the cold dirty ground, the endless ocean, or those bastard enemy lines. Fred shall exclaim one of his most iconic lines when flying though the air "COMING THOUGH". However when he hits the floor he shall also proclaim "that bloody hurtz!" or "OUCH! Me bone!".

Fred is the only known named character of the Holdfast universe. As such he might as well be the God of Holdfast.

Fred is hidden on some maps in game, who will find this mischievous mongrel slayer?