Difference between revisions of "Defences"

Equip hammer in hand and fortify your position with the Sapper class! Construct well-placed defenses, earthworks and artillery to turn the tide of battle in your favor. Carry explosives to breach the adversary's strongholds, repair damaged artillery pieces and more.

Palisades, gabions, explosive barrels, earthworks, sandbags and the list continues. There's a vast selection of defenses, artillery and explosives to construct. Unique to each and every player-built object a set of materials or limit is applied. Materials play a role within this new mechanic to restrict the number of constructible defenses that can be present at any point in time during a match. Larger constructions such as the Chaveux De Frise deplete more resources than their smaller counterparts. Chairs now make part of the selection of constructible defenses. Albeit not being as useful of a defense, it'll certainly provide you with a neat resting place to view the ongoing onslaught as mayhem ensues. 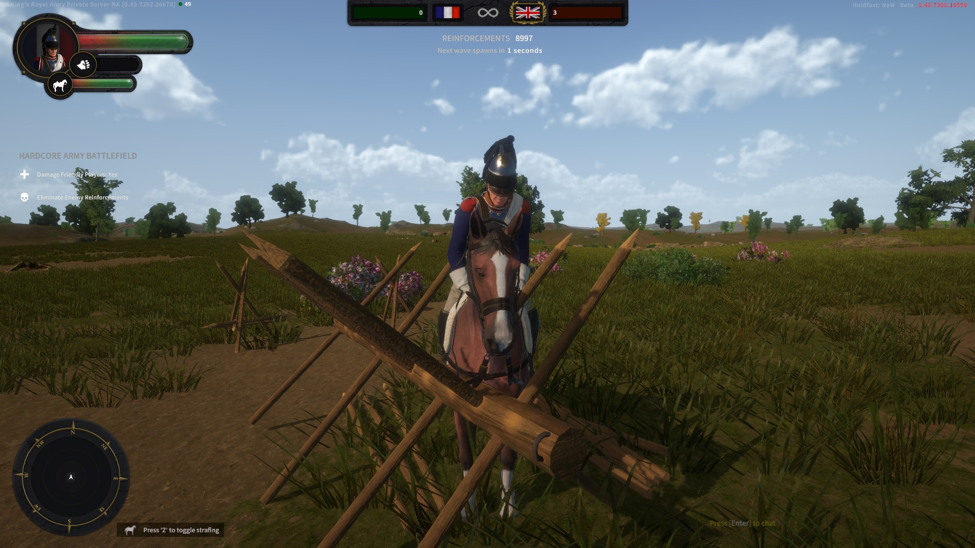 Sappers are your go-to class to freely construct a multitude of defences, carriable swivel guns, fusible explosive barrels and repair damaged artillery pieces. Itâll surely become a favourite amongst those looking to play a support role! This class comes equipped with a carbine and sword.

Selecting Your Construction - Stage 1
Once you have a hammer in hand, hold your [Right Click] Mouse or [G] Button and youâll be presented with a radial user interface allowing for quick navigation between different constructions. Constructions are split into two categories, artillery and defences.

Building Your Construction - Stage 3
Now that your construction is in place, start hitting at the palisade with your hammer to begin its construction. In order to finalise the construction, you need to land enough hits on the palisade until the entirety of the circle UI representing the defenceâs health fills up.

In a constantly changing battleground, we ought to provide players with the capabilities to move defenses elsewhere even after they have already been enacted. Deconstructing a defense will retain back its material points allowing sappers to make use of those materials to build the defense once more. Contributing further to the strategic element that this update brings with it, destroying the enemy faction's emplacements through the use of various artillery pieces, explosives or melee weapons will deplete materials from their pool and bring them into yours. Sappers can then make use of these materials to further solidify your defensive positions. They can also be pretty effective at destroying enemy defense with their sledgehammer whilst in Deconstruct mode.

Sappers can construct explosives and ignite them to cause massive destruction to the environment and their enemies. It's ticking like a time bomb, the fuse is running short. There's plenty of scenarios were the above-mentioned explosive barrels come into play. Construct, carry, set a fuse and make quick work of enemy emplacements. Don't break your jaw in awe just yet as you better watch out for enemy fire while carrying these volatile explosives or they'll be sure to blow you to kingdom come.