This page will cover the basics on how to use artillery
Keep in mind this page is not yet finished and will be updated soon. 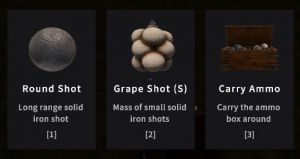 Grapeshot and round shot, found in every ammo box 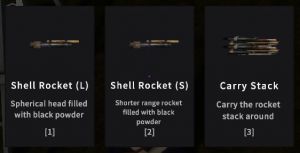 A rocket stack with Long-range and Short-range rockets

There are 4 types of ammunition (not including chain shots in naval combat) and they each have their uses.

Often called the cannonball this ammunition is used in cannons and mortars.
The most commonly used type of ammunition is the round shot, this is a solid iron ball used mostly for long-range to medium-range combat.
This ammunition is almost always used in line battles, it has the potential to wipe out entire lines due to the shot being able to pierce players and defenses.
This ammunition can destroy sapper built defenses and enemy artillery, if it strikes upon a loaded artillery piece, the piece will blow up which can often result in the death of the entire crew manning it.

Sometimes called canister shot this ammunition is used in cannons and swivel guns.
This ammunition shoots a bag of small metal pellets which can shred through any close-range infantry or cavalry.
It is an ammunition used almost exclusively in short ranges due to the inaccuracy, it is effective up to 50 meters but can be shot to 100 meters.
Though not often used it still has the potential to wipe entire lines in one shot and can be incredibly useful to a cornered cannoneer.

This ammunition can only be used inside of a rocket launcher, and can shoot incredibly far.
They have a range of about 100-250m and explode upon impact when hitting any surface (includes trees so watch out)
When fired from the rocket launcher, they usually don't fly straight, they will go left and right in the air and can because of that be inaccurate and often fly into trees or buildings that stand in the way.
They are referred to as "Shell Rocket(L)" ingame.

This is a long-range rocket but only useful from about 35-55 meters and can be useful to defend artillery or friendly lines.
They are also rumored to have a larger exploding radius than long-range rockets. 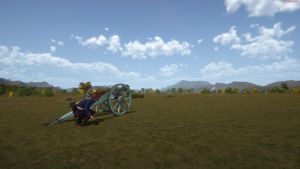 French Cannoneer aiming a cannon in a grassy map

Cannons are the backbone of the artillery, they are the most versatile and most used artillery pieces.
They can be loaded with either grapeshot or round shot from an ammo box.

You can load a cannon by holding the desired ammunition type and holding "E" on the barrel.
When the ammunition is loaded hold "E" again to ram the shot, even though only the cannoneer has a ramming rod weapon any class can ram the shot.

When aiming a cannon you will only have to worry about bullet drop when you are firing at a distance above 100+ meters.
Though 100 meters definitely isn't the maximum range (around 500 meters), it will prove difficult to find the best position to aim your cannon.

If you find it too difficult you can always move up your cannon, this is done by pressing "E" on the wheels of an unloaded cannon.
You can move up the cannon with 2 people for increased speed which can prove useful in tense situations.
Keep in mind you will probably have to move up an ammo box as well, this can only be done by a cannoneer but a sapper can build one for no material cost if he is available.
During the moving process, a cannoneer can override the person moving it so they can move it wherever they want.
If 2 non-artillery classes or 2 artillery classes move up the cannon at the same time the first that started moving the cannon will always be favored. 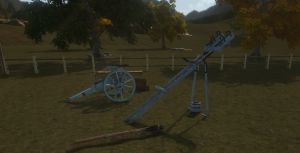 a cannon (left) and a rocket launcher (right)

Rockets are very unreliable as a beginner but with time can be learned and can be turned into a deadly long-range and short-range weapon. They can be loaded with 2 types of ammunition from a rocket stack (see the ammunition tab for more info) and can be loaded with 2 rockets at the same time(one on the left one on the right).
Rocket launchers can be used for short-range combat and for long-range combat with both of the rocket types.
The thing that makes rockets unreliable is their tendency to swirl from the left to the right in the air randomly, this can make precise aiming with the rockets difficult as it is nearly impossible to hit. This also means you just have to be lucky to hit a price shot.
Fortunately, the rockets will usually go to the same spot if fired from the same side of the rocket launcher.
Rockets also have the ability to destroy enemy artillery and can perform the same explosion that cannonballs will have on a loaded artillery piece.
You can move up a rocket launcher by holding "E" on the bucket in the front of the launcher, you can only perform this action as a cannoneer.
When you've moved up the launcher (the same way as you would move a ladder, also performable by 2 people) you can build it up again by holding "E" on the bucket.
When rocket launchers spawn they will always spawn unpacked allowing cannoneers to move it up quickly.
There isn't that much to say on the aiming front of rocket launchers since it is best learned if you try it out yourself, it will take a while to learn but if done properly you can perform amazingly well with it. 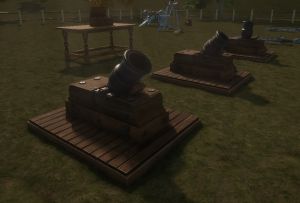 These incredible artillery pieces are notoriously difficult to master but can shoot incredible distances (50- around 850 meters) and can be incredibly dangerous in the right hands. Mortars can be loaded with round shot alone, but they have a few interesting perks over cannons. Perks of a mortar over a cannon include:

You can also destroy enemy artillery with it.
Of course, there are some drawbacks though. You can't aim grapeshot, you can shoot only further than 50 meters so you can't defend yourself from close range troops or cavalry with it and a mortar takes a while for a shot to land.
When you shoot the mortar a 15 second countdown will take place before you can shoot it again, you can take advantage of this countdown to see where your cannonball landed and you can adjust your shot using that info.
You can not move the mortar up, so if the map has a bad mortar spot, you can't do anything about it.
Like rocket launchers, the mortars are difficult to aim since you have to purely guess where your shot is going to land, unlike rockets however the shot lands exactly where you aim it.
A few things to keep in mind that if a mortar is shot or rebuilt by a sapper after it being destroyed it will still retain its aiming position.
In conclusion, it can be a useful tool to an experienced cannoneer but it highly depends on which maps.